keyboard_arrow_left Homepage
Cookie preferences
This website uses cookies, which are necessary for the technical operation of the website and are always set. Other cookies, which increase the comfort when using this website, are used for direct advertising or to facilitate interaction with other websites and social networks, are only set with your consent.
Configuration
Technically required
These cookies are necessary for the basic functions of the shop.
"Allow all cookies" cookie
"Decline all cookies" cookie
CSRF token
Cookie preferences
Currency change
Customer recognition
Customer-specific caching
Gross / Net price switch
Individual prices
PayPal payments
Selected shop
Session
Comfort functions
These cookies are used to make the shopping experience even more appealing, for example for the recognition of the visitor.
Note
Statistics & Tracking
Affiliate program
Push Notifications | Analytics (Signalize/etracker)
Track device being used
Categories
Information 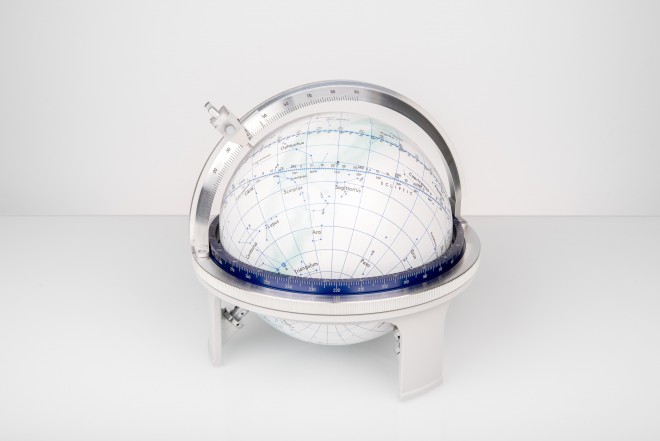 The celestial globe shows the starry sky with the constellations and fixed stars mirrored on a sphere, so that an exact determination of position is possible over several scales with angle graduation.

The representation/projection of the stars and constellations on a sphere has the advantage that the starry sky can be projected realistically without distortion. The sphere can be rotated according to the local hour angle and the world axis can be tilted according to the geographical latitude.

In two-dimensional images, distortions basically occur; a precise representation and determination of position in a planar form is not possible.

Starglobe and starfinder are used to convert alternately celestial to horizontal coordinates of a star.

Where is this or that star now at my position? The celestial coordinates: local hour angle and declination are found in the Nautical Almanach. Adjust Starglobe or -finder accordingly. Now read the horizontal coordinates: azimuth or direction and height of the star.

Conversely the celestial coordinates and name of the unknown star can be concluded from azimuth and height. This simplifies astronavigation with the sextant:

Also, many navigational calculators include easy to use programs to solve these problems.